Earlier this month, a group of my friends, along with my husband and I had the pleasure of getting a personal (golf cart) tour of Serenbe from founder Steve Nygren (it was part of a chef dinner silent auction prize through Project Open Hand).  Steve welcomed us to his very different community, a progressive 1000+ acre world (or “urban village”) where almost every facet of daily living has been re-thought in some way, whether for environmental or efficiency purposes, or, of course aesthetics (design, art and whimsy are key here!) 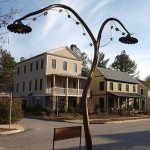 One example of design being an important part of life here is the way Serenbe have made changes to regular street lighting. These whimsical light fixtures wouldn’t typically be “to code” (in any other city) but the Serenbe team worked diligently with engineers and the governing board to get the lamp posts approved for their community alone. 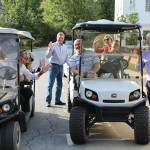 Another feature that Steve proudly showed us is the Serenbe waste water collection, treatment and reuse system.  Steve pulled our golf cart over next to a wonderful little marsh / meadow area with a quaint boardwalk path winding through it.  He told us this is the most popular site for wedding photos… and its their waste water treatment area! 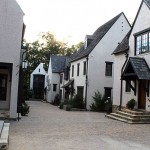 Steve explained that different neighborhoods have different styles, including one that appealed to our token English group member, based on England’s own countryside and villages.  Amanda said she could have been plopped here without knowing where she was in the world, and would have assumed she was in a village back home, even the little paths, allotments and shrubberies seemed to fit the bill! 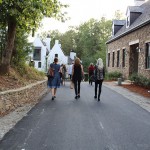 And nature is everything at Serenbe.  While part of our group got a little lost on their own wee late night tour, we discovered that there are many ways to traverse Serenbe on the woodland walking paths. It’s faster to walk here than to get in your car (or golf cart, of which there were quite a few).

From the Nygren website I found this quote which I feel absolutely describes the Serenbe community:

Serenbe exemplifies a community where people authentically live, work, learn and play in celebration of life’s beauty. Serenbe is a place where connections between people, nature and the arts are nourished.

An insider’s tale: Living between Midtown and Serenbe 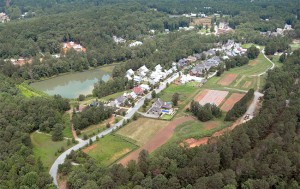 We spoke with Monica, who has lived in Atlanta since 2000, is married and has 2 sons (5th and 7th grade).  The Olsen family of four live in Midtown (one of the 7th street townhomes that Dawn and team built in 2016) and have a second “vacation” home in Serenbe, which they purchased in 2009.

The couple both grew up in California and were used to getting to the beach or mountains within an hour and couldn’t find that easy escape form the city of Atlanta. They also liked a location (whether in the city or otherwise) where they could walk to stores and attractions. Then, at a birthday party one spring afternoon, they discovered Serenbe and fell in love and at just 35 miles (without traffic) to the beautiful countryside plus its convenience for the airport, the 1000-acre community was a perfect match for their needs.

The family purchased an existing home that was close to being finished that had more room for their family and visiting friends. Thinking it would be a great weekend away home and place to spend the summers.  And now? The family are there every weekend and holidays, as well as all summer. They enjoy the miles of trails at Serenbe, the farmer’s market and organic farm, the restaurants and local boutiques.

“We have met some of our best friends at Serenbe. And there is always something going on, plays, music, talks, dinners and just hanging out with a glass of wine with neighbors.” 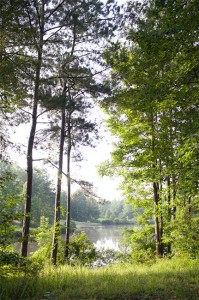 Switching between Atlanta and Serenbe is truly the best of both worlds.  With just a wee drive, they have access to nature and an incredible community of neighbors at Serenbe but can still enjoy popping up to the city for work, a show at The Fox or a run on the Beltline.

On living in Midtown and Serenbe:

We love being able to pop into the city for a restaurant opening or shop at new retail like Hudson Grace or Serena and Lily (two of our favorite stores from San Francisco). The proximity to Piedmont Park has been amazing and access to the Beltline gets us all biking together as a family especially with the new Westside extension.

Both locations have the walkability we crave and the access to nature we love; Serenbe is more immersive with nature right out your front and back doors and has a serenity and calming effect once you get here.

Midtown and Serenbe have incredible arts and cultural programming with pretty much everyone coming through Atlanta on national tours and then we can go see Serenbe Playhouse, a nationally recognized theatre, that performs outdoors for a completely different experience. It really is the best of both worlds.

We love the freedom that our kids have to run between their friends’ houses and play for hours in nature making forts and playing in the woods and streams. Being able to walk down the street and run into neighbors, where a conversation turns into a play date, a glass of wine and, often, dinner.