You may be all like “Beltline, Beltline, Beltline” and Yes! it really is a great place to spend your time… But if you want to escape the crowds this Spring, you can search out some of the of-the-beaten-track pocket parks and outdoor spaces in our wonderful city!  (If you missed our Fall review of Atlanta’s pocket parks, check it out now!).  Make a wee picnic, get the kids packed up in their little red pulley cart, the dogs all harnessed up, and heck even put the bunny rabbit in your tote bag, and head on over to one of these tucked away spots for one fine Atlanta Spring afternoon: 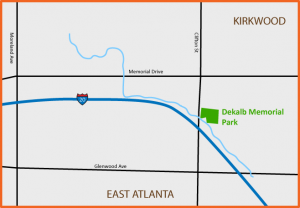 Dekalb Memorial Park may not be the largest, smallest or busiest park in Atlanta, but it has a lot of potential. If you want a picnic table on any weekend during the spring or summer, better get there early. Families and large groups are not uncommon. The park includes shady spots along with plenty of space to drop a blanket and hang. Or there’s basketball and tennis courts as well as plenty of open space where I’ve seen soccer, matches, frisbee and flag football games, and even guys practicing their short irons and wedges. All that and Sugar Creek too! 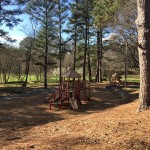 With plenty to do and an abundance of street and lot parking, it’s a great pocket park that you’ve probably driven by dozens of times without even realizing it. I recommend, dropping in and enjoying it one day soon. 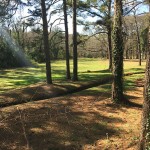 Walking distance from East Atlanta, Kirkwood and Edgewood. The park is bounded by I-20 & Sugar Creek on the south side and Wilkerson Drive to the north. Wilkerson is accessible by either Glenwood on the south and Memorial on the north.  Note: the park does reside in the flood plain though it’s rare (not unheard of) for the Creek to overflow. 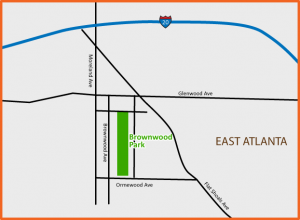 Brownwood Park is a 12-acre neighborhood park in the middle of  East Atlanta.  Brownwood has your typical play structure for kids and lots of swings.  It also has a picnic pavilion, tennis courts, an open field and community center.  Across the street are paths for walking and biking and a parkour course. There are many rolling hills through Brownwood Park.  Its a great place for children to ride bikes or to give your pooch a nice leg stretch and if you’re not from EAV, you can find easy on-street parking to go enjoy this park.

Brownwood Park is also home to the East Atlanta Beer Fest, which in 2017 is held on May 20.  Check out the Facebook EA Beer Fest Event page to learn more. 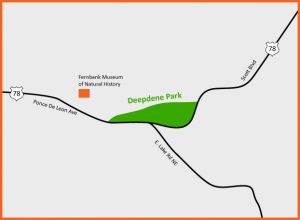 Deepdene is the eastern-most park of the Olmstead Linear Parks (see below) and the only one of the 6 that is wooded, hence it’s my favorite. It hides below Ponce across from East Lake Dr and well below the street level. A stream runs through it adding to the magic. The city’s tallest Tulip Poplar resides here. The photos below are from an Urban Explorers hike I took with some friends in 2016. Here you can learn about Urban Explorers and what an AWESOME group they are. View the Deepdene map using Google Maps.

Olmstead Linear Parks-Deepdene Park
The area known as Druid Hills was developed by Atlantan Joel Hurt of the Kirkwood Land Company. In 1890 Hurt persuaded Frederick Law Olmsted Sr., who was then working at Biltmore Estate, to travel south to see the 1,500-acre tract he had purchased. Olmsted subsequently agreed to prepare a plan for a residential suburb.

Olmsted submitted a preliminary plan to Hurt in 1893 in which the linear park was first laid out. The firm produced a final plan in 1905, two years after the death of its founder. Olmsted’s sons remained involved with the project until 1908, when the property was acquired by the Druid Hills Corporation. This group of investors, which included Coca-Cola magnate Asa G. Candler, completed development of the suburb and park.

Though the original park design remained intact, plants and installations inconsistent with Olmsted’s aesthetic were added over the years. Poor maintenance and the effects of erosion also contributed to a decline. In the 1980s, the park was threatened by a proposed freeway, though community opposition eventually blocked its construction. To rehabilitate the park, a coalition was formed that included the Olmsted Parks Society, Druid Hills Civic Association, Park Pride, the city of Atlanta, DeKalb County and Fernbank. Representatives drafted a master plan for restoration, aided by specialists in Olmstedian preservation. The Olmsted Linear Park Alliance was created in 1997 to implement the plan.