Introduction from Amanda: I remember the first time I visited Little Five Points, 😯 that would have been 18 years ago!!  I’d been relocated from the UK to some place OTP (when I didn’t know any better) but I still would drive down on a Saturday afternoon to enjoy the vibe of this iconic Atlanta neighborhood.  Little Five has continued to develop in those many years but some of the classic joints still exist.  I’ve watched at least one match from every world cup in the Brewhouse Cafe; I’ve purchased countless whimsical gifts (for myself and others) at Junkman’s Daughter, and had many a fun evening with locals and visiting friends in this thriving location, including seeing various productions at the 2 (yes TWO) theaters: Horizon and 7 Stages.

Now the Environs Team has visited some of their favorite spots in Little Five, home of one of the top ranked burger joints in the US (The Vortex).  Enjoy their reviews and walk or bike on over on a nice sunny afternoon to see what’s going on:

BEETS and BURGERS in L5P!

Dawn: Terry and I have been to the Porter many times. The beer selection could be the best in the city and the food is true Gastro-pub fare. Fresh ingredients and creative dishes are always on tap

So, this visit was to take pics and have our favorite dishes. Boy were we surprised. For one, I had a fantastic hoppy IPA from the Port Brewing Co called Dank and Sticky. I can’t really describe beer so here is what the brewer says: “Our inaugural release boasts aromas of citrus, and dank, resinous pine. As the flavor opens, huge notes of stonefruit and dank resin give way to a juicy malt backbone and drying hop bitterness on the finish.” It was yummy. Terry had local Eventide Kattegat. He drinks this at the brewery and enjoyed it at dinner. Here is what the brewmaster says about the beer: “The beer itself is a Baltic Porter. This style, unlike its better know cousin the Robust Porter, doesn’t have the deep roasted, burnt notes, noticeable hops, and prevalent esters. Our Baltic Porter will have a clean profile with flavors reminiscent of rich, dark sugar, vinous and herbal notes, some dark fruit, and just enough dark chocolate and coffee to bring everything together. We are very excited to present our new interpretation of this old style to you, and we look forward to raising a glass with you soon.“ 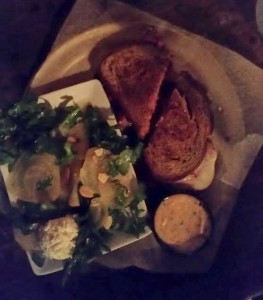 Now for the food. The only complaint were the Goat Cheese Fritters. Unless you’re looking for the 80’s version of fried cheese, don’t order this. BUT, DO ORDER the Beet Reuben! It’s on toasted rye with all the same ingredients as a Reuben but made with roasted and spiced beets. It might be the best sandwich I’ve ever had. You do have to like beets though. It came with fries (I’m off fried potatoes for the moment) so I got the add-on Arugula salad. A generous portion and very nice side dish I would recommend. I think I might have to go back next week before beets are out of season!!! Hats off to the chef on that one…

Terry had a burger. Are we surprised? He tells us more here:
Terry: I had to chime in on this month’s blog. Dawn took me to one of my favorite places in the city, heaven. Okay it’s not called heaven but The Porter is heaven to a beer and burger lover like myself. 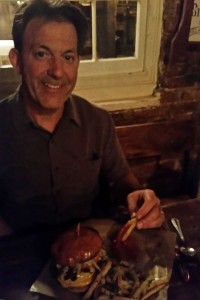 I obviously went with the burger which is always huge with lettuce, a big hunk of tomato, bacon, American cheese, b&b pickles and their special sauce. It comes with fries or a salad (for a couple of dollars more); I chose the fries as these are some of the best fries in the city. Thin cut fries covered in Parmesan cheese, garlic and other tasty spices. And now for my food critic review…. It was Yummy!!

When it comes to the beer menu, it is quite extensive. They have so many beers (I heard someone say over a thousand) you will definitely find some you already know you love but I recommend asking the extremely knowledgeable servers and bartenders to help you select something different. Be careful they have a lot of high gravity (high alcohol content) beers. Whatever beer you chose you can count on it being served in the proper glass.

I’m not sure if the Porter has the biggest beer selection in the city but they have plenty of choices combined with really good food in a Beer Bar atmosphere, hence it is one of my favorite Beer Places.

The servers and bartenders here are very knowledgeable so even if you’re not a beer buff, give this place a go! Check out the Porter Beer Bar website.

This month’s focus on Little Five Points made me happy; it is one of my favorite areas in Atlanta. I met a friend that I had not seen in 7 years on a chilly March Sunday at The Wrecking Bar, which is located in the former Victor H. Kriegshaber Home built in 1909 by Atlanta Architect Willis J Denny. The house was called “The Marianna” after Kriegshaber’s daughter Marian. The brewpub website has a great timeline of the building up to and including its present use. 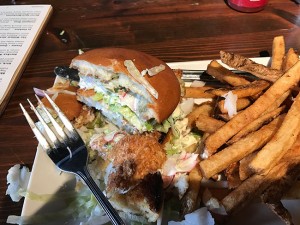 The Wrecking Bar brews some wonderful craft beer in-house and if beer isn’t your thing they also serve up signature hand crafted cocktails. The food is heavily focused on local sources. Brunch is on Sundays starting at 11am. My friend and I arrived at 1pm since I had already had breakfast that morning. I decided to get the fish sandwich. It was good, but I ended up forgoing the bread and eating the fish and slaw with a fork. My friend wanted brunch and he got the Eggs Marianna, it is a poached egg on a cornmeal cake with swiss chard and a smoked trout cake. He said it was delicious.

The Wrecking Bar is open for dinner during the week and lunch is served on Friday, Saturday, and Sunday. Tuesdays include a special veggie menu. Also at the Wrecking Bar is a private event space called the Marianna. If you are looking for a place to get something good to eat along with a wonderful beer or cocktail be sure to check out The Wrecking Bar.

In the later part of the 20th century across the country many older, smaller art deco theater’s found themselves under pressure to compete with the big block multi-screen movie-plexes. The Euclid Theatre in Inman Park was no exception. While the property has undergone numerous changes to its interior, seen a variety of theater operators and even dormant periods – it managed to survive thanks to Atlanta Mayor Maynard Jackson and a local group of investors and their efforts to revitalize the area in the early 1980s. 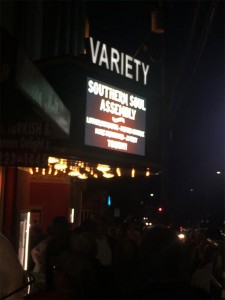 Renamed Variety Playhouse in 1989, the space was renovated with live performances as well as movies in mind and included a large stage as part of the effort. This concept met with resistance and ultimately failed, but during that period it was common for them to book music acts to fill the calendar.

Despite changes in ownership, additional renovations and improvements it continues to showcase a variety of musicians and bands. The most recent renovations included a re-vamping of the bar area opening up the venue in a manner that provides for easier access to refreshments and better flow throughout the lower level was a fantastic idea and much needed in my view.

Earlier this month, I grabbed a couple of tickets to see the Southern Soul Assembly a band consisting of JJ Grey, Mark Broussard, Luther Dickinson & Anders Osborne. Each of these guys are talented and successful and I was very excited at the opportunity to see them play together. 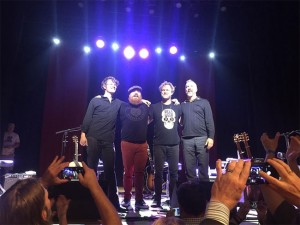 Wow! These four talented singer song writers combined their ridiculous guitar and vocal talents with, it seemed, one goal – to compete with and outdo one another ensuring that all in attendance were treated to an amazing show. As they alternated songs and collaborated with one another in a seamless manner pushing each other to a completely different level, Leslie and I along with a sold out, standing room only crowd listened and watched in awe.

If you get a chance to see any one of these artists, I highly recommend you do. But, if you’re a music lover like me – you need to add Southern Soul Assembly to your must see list.

The Vortex, Front Page and More… 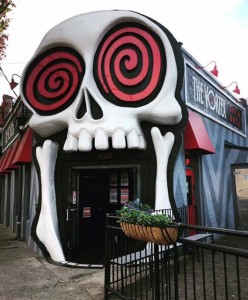 My friends tricked me into moving to Midtown, and I’m that individual who rarely leaves unless it’s for work or school. Well, I finally had to break this unspoken rule for myself and got to explore Little Five Points. A strange number of my friends happen to be somewhat hipstery so I had some idea’s of where I could head to relax, where I’d stuff my face, and where I could find a really good drink (sorry, mom). I’m so happy I waited until it was warm to explore, because I wouldn’t have experienced what people say is true: the community there is truly a community. I love Midtown, don’t get me wrong, but WOW! Everyone I walked by was nice. They were cheerful, asked what part of town I lived in, offered suggestions, one person even ended up at Vortex (my favorite burger place ever) with me after we realized we knew some of the same people. Talk about a small world…

Nevertheless, here’s the scoop: Vortex regardless of the location is amazing, Front Page has really good margaritas, and Posse Riot may be my new go-to store for clothes. I didn’t stray from my favorite burger at Vortex (the Rebel Outlaw), but there was something a little bit more fun about this Vortex than the one on Peachtree.

Perhaps it is the crazy face outside. Either way, I enjoyed every bite. After my lunch, I decided I deserved a drink so off to Front Page I went. PLEASE TRY THE AUSTIN A$$. 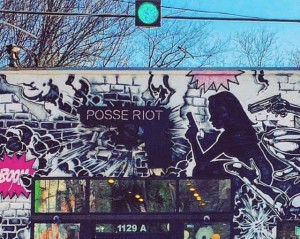 I was feeling so great afterwards I walked into Posse Riot (they also ship internationally) and well, this is where my rent money went. Ah-mazing shoes and cute clothes for a decent price? Um, yes please! Long story short: there’s something for everyone in L5P, and I can’t wait to go back!

Links to each establishment here: