This month it was an easy jaunt for the Environs Real Estate Team as they took friends and clients over to Oakhurst, a historic neighborhood in Decatur.  Oakhurst is another of these wonderful tucked away places in the Atlanta area with an eclectic and, let’s say, progressive community spirit. Y’all may remember that Dawn and friends visited the Oakhurst Porchfest last year (it’s October 14th if you plan on visiting it this year).  It was a blast.  Now… on to the food!

The Universal Joint,or by all who know and love it, simply the U-Joint

When I first moved to Decatur in the summer of 1998, it was Oakhurst that provided the wonderful craftsman bungalow project house that Leslie and I decided to buy and develop. A few months later, when finished with the renovation to all the systems, creation of a master bath, a new roof,  laundry room, kitchen and hall bath, we moved in, placed our Oakhurst flag on the large covered porch and started looking for something to eat!

At the time, there were few options in the “village” area as it had yet to see much revitalization at that point. There was Mojo Pizza, the mini-mart, and a tapas place along with a laundromat, frame shop, dilapidated grocery store and numerous empty storefronts. That is no longer the case!

Today, the Village is teaming with restaurants, cafés, shops and other businesses. One of the first properties developed after we landed, a small old gas station in the middle of the main intersection. 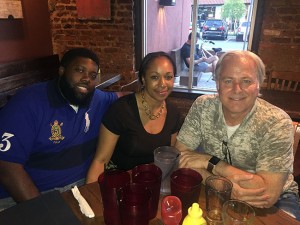 The Universal Joint came along right when we and the neighborhood needed it and long before the full-scale gentrification of the neighborhood and improvements made at and to the nearby elementary schools occurred. And, it remains one of my favorite places to meet with old neighbors and friends in the area. In fact, it’s rare to go in and not run into someone I know. I love the laid-back vibe and feel of this space.

This week it also became a perfect meet point for my investor clients Charles & Nekeia King to meet me for a quick business dinner. While we discussed a number of investment opportunities Charles and I enjoyed several of Athens’ own, Creature Comforts IPA, Tropicalia. Lucky for Charles, Nekeia elected to be his designated driver and skipped the cocktail portion of our outing.

One of my favorite things about the place is the eclectic menu. There is something for everyone. In the mood for a burger? A hotdog? Mexican? Mediterranean? Greek? American, Asian? There’s an option here for you!

For dinner, Nekeia went Greek choosing the Gyro sandwich. Charles tried one of their specialty burgers, the Smokehouse. And, I went south of the border choosing an Arugula & Mushroom quesadilla. Yum!

Easy to recommend this place, which has continued to expand its outdoor seating, menu and drink lists. A wonderful time and productive meeting in one of my favorite neighborhoods and bars. And, of course, I ran into another friend and client, Judy, on my way out – Perfect! 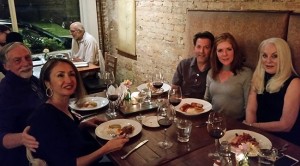 So we took a crew of friends to this Oakhurst restaurant/wine bar/event space. It’s owned by none other than Pam Ledbetter (who is now married and may have changed her name) of Neighbor’s Pub fame (VaHi). For those who are interested, I was once a partner with my ex in Neighbor’s, the Urban Market and the Dark Horse, all in Virginia Highland. So Pam and I go wayyyy back…

Back to Wahoo! We had a FABULOUS time. Table was ready when we arrived for our reservation. We had changed it a few times and no one seemed bothered. Cocktails were ordered. Most were great. The bartender could use a Negroni lesson but that was the ONLY imperfection of the evening. Starters were Pimento Cheese Fritters. Smoked Duck Breast and the Chevre Brulee. I didn’t hear any complaints about them and we forgot to take a photo until it was all gone! The Duck Breast was the FAVE of the bunch. 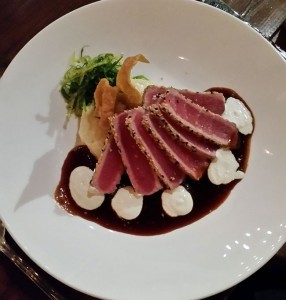 For dinner, we had the Blackened Wahoo, the Copper River Steelhead Salmon and the Sesame Crusted Ahi Tuna. All were fantastic but the Ahi won the vote. They were open to subs on the side dishes as well which was quite nice. The wine list was well thought out and reasonably priced, I assume because of the attached wine shop. I wish I had written down the details of our selection but I didn’t and you’ll have to just trust that it was good

Old friends in the hospitality industry always come through…Pam bought us dessert which was TO DIE FOR! We had the Bread Pudding, the Flourless Chocolate Cake and the Butterscotch Pot de Crème….OMG. I’ll go back for the Pot de Crème soon.

They have a wonderful outdoor space as well as very comfortable indoor dining. I am so glad to see Pam and hubs, Ski, doing so well. Don’t miss it for your next special occasion or just because you’re too lazy to cook

Learn more about the Wahoo! Grill at their website.

So I was really excited to see this place since I love the building. It was once a hospital that had an OR surrounded by windows for light. I’m not sure I would have wanted to be on that operating table! 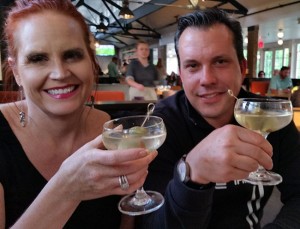 The décor is quite nice and of course the grounds are beautiful. High heels were a bit touch since the walkway to the door was slate gravel. Just an FYI…

We started with cocktails with our friends Josh and Carrie in tow. Service was prompt and all were good. For starters we had the Avocado Devil Eggs and requested the crab on the side as well as the Pabst Battered Cauliflower. The “Devil” (not sure where the “ed” went) eggs were nice but came with crab. When returned asking for the crab on the side, they came without crab at all. Finally we got a little ramekin of crab but it took some effort. 3 of us loved the cauliflower. My picky guy, Terry, said he didn’t like cauliflower…even fried in beer! I was ready to rush him to the ER

For dinner we had a couple of salads…the Beet and Pear and the Georgia Greens. The Georgia Greens were well-received and scrumptious according to Josh, Kerrie and Terry. My beet salad was not. The beets were under-cooked and there was very little flavor in the dressing. I ate a few bites and left it. After the trouble with the crab, I figured I would wait for the entrée. 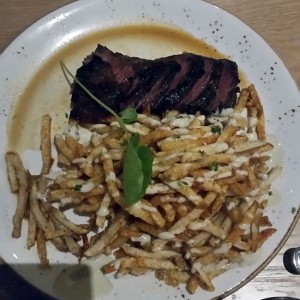 We had a variety. I tried the Southern Vegetable Crock, Terry had the Cast Iron Red Snapper, Kerrie tried the Hanger Steak and Josh went for the Roasted Duck Breast. I received the French Onion Soup (I had to have pissed someone off that day!) which was quickly fixed. It was good but I probably wouldn’t reorder it. Terry LOVED the snapper and Kerrie was good with the steak. I tried a taste and agree it was one of the best dishes on the table. Josh gave the duck an OK.

I feel like there was just something off that night in the kitchen. The plan is to try it again. Having been in the food biz for over 10 years, there are just days that you can’t get things right. I certainly have those on occasion!