This fabulous month of September, where the temperatures are (occasionally) dropping and the leaves are most definitely following their seasonal gravital path, the exuberant and ambitious Environs Real Estate team headed out to some of Atlanta’s music scenes.  We hit just a few, so if you have your own favorites you want us to review, please email us with your suggestions!

If you haven’t been to the Vista Room yet, I urge you to check it out. Great space and room. Great sound. High ceilings, elevated stage, dance floor, table and booth service, a large well stocked bar and music too! Located on Lavista Rd in the Oak Grove area of Decatur 30033, the Vista room is connected to and essentially an expansion of Napoleon’s Grill one of our favorite local restaurants. 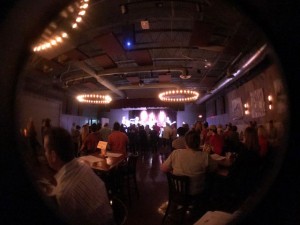 Joining their mailing list is a great way to stay on top of which acts are coming. That’s how we found out about the upcoming Cowboy Mouth show. If you haven’t seen these guys, again, I urge you to check them out!

Hailing from New Orleans this alternate rock and jam band has a super high energy lead singer Fred LeBlanc known for his “maniacal” performance style. He pulls the audience into his frenzy and “requires” audience participation – fans are only happy to oblige. You may recognize them from their hit song, Jenny Says. At one point, he was not getting sufficient feedback from the crowd, so he left the stage and worked the room cajoling reluctant bystanders out of their seats and onto the dance floor. 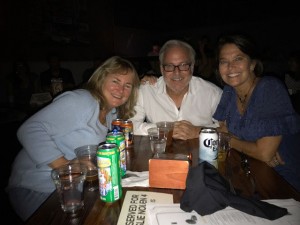 Leslie and I were joined by our good friend and my client, Judy. While our focus was the music, a few cocktails, and wishing her well on her planned move to Oregon, we thought it’d be a good idea to have some food.

The Vista room offers a variety of options from salads to ribeye’s as well as numerous appetizers, specialty burgers, and sandwiches. Or try their Sweet Tea Brined Fried Chicken or maybe some pork or fish tacos. And no shortage of options for the vegetarian or gluten challenged. 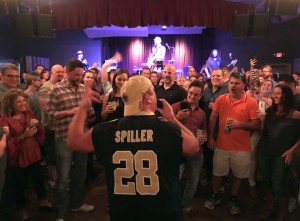 We decided to graze on a few appetizers. One of my favorites, the Pimento Cheese fritters plus some of their fantastic French fries, as well as an order of guacamole and chips all washed down with a few (possibly more than a few) drinks. A full bar provides plenty of options. I chose to stay local with a Terrapin I-5 IPA, delicious! Leslie and Judy opted for margaritas!

A good time was had by all! I easily and highly recommend The Vista Room, Napoleon’s and Cowboy Mouth! 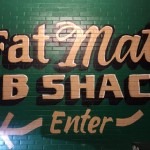 Somebody said “music venues” at the exact moment I had a craving for hanging out in a shack eating pulled pork and bbq sauce (and listening to the blues)!  So my friend and I headed on down to Fat Matt’s Rib Shack. 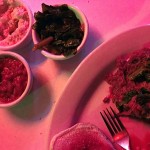 If you haven’t heard of Fat Matt’s – one can only assume you are fresh in the city – other than that, I can think of no excuse.  This place has been around FOREVER and I have to say, I don’t think anything has changed.  You are literally eating in a shack – there’s been no upgrades here since my last visit – no renovated bathrooms, no fancy seating options, and by the looks of it, no licks of paint added!  But, and here’s some fine news, there doesn’t seem to be any price change either! My pulled pork sandwich, which came with a bag of Lay’s chips (no fancy flavors, just plain old crisps), was $4.50!  I know I know, I shoulda got the ribs – I remember getting them on a previous occasion and it being an emotional experience, but I was fresh out of the movies and somewhat full on popcorn.  Oopsy.  The sauce the pork comes in is a perfect mixture – its sweet and not TOO BBQ-y – I’ve since read its “Carolina style”.  Being a Brit ex-pat, I don’t know the BBQ lingo, I just know I loved it, and sopped it up all the remaining sauce with the soft white bread bun.

We also ordered 3 sides: the Coleslaw, the Beans and the Collards.  The Coleslaw was Lynn’s fave (but I could taste celery and let her enjoy it to herself), the Collards (pretty standard but with some of the hot sauce added, I was a happy camper) and the beans. 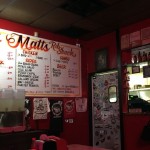 Fat Matt’s get a lot of kudos for these rum baked beans, and I can see why – they are full of flavor although a little too sweet for me – I’m from the land of “baked beans on toast” as a meal and thus have some very particular standards. But I’ve been here in the south 18 years and I understand how Fat Matt’s is a must-visit for a low-key (order at the counter) shacky kinda venue; we don’t have many of these left in Atlanta!  They also have a decent beer selection on tap – I got a US pint of Shock Top Belgian White (I point out the measurement here because it was actually the perfect amount, a full pint may have been too much alongside a pulled pork sandwich and all the sides). 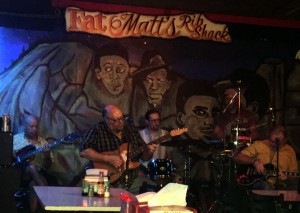 Now the music.  Here’s what really makes Fat Matt’s stand out.  Every night (yes, every night) they have live blues music after 8pm. If you sit inside, you’re basically there for the music (and the food) and not your companions as its pretty loud for trying to hold a conversation.  A great compromise, especially this time of year, is to sit outside – yeah you’re sat next to the cars, but you hear the music clear and can still chat with your friends.  But.. we went for the music.  That night, the band was a 5-piece called “10,000 Pontiacs”.  I’ve googled these guys and I guess they lay low on the web as I can’t find anything except that they play at Fat Matt’s!  So with my limited music knowledge, here’s what I can tell ya.  There were 2 lead guitarists who also took turns at lead vocals, which meant we got to hear the 2 different styles allowing each song to stand out from the previous.  They had a bass guitarist, a drummer and a full-on percussionist who was set up just like a drummer (all sorts of kit!).  I was really intrigued by this dude and worked on singling out what he brought to the band – which was a lot of additional atmosphere than what I consider a typical blues band – he also was kind of erratic in his movements and that was pretty visually entertaining too.  Had I been a blues groupy, I woulda chatted with him after to see what that was all about!  My friend recognized a few of their tracks and I even got one of them – they were foot-tappingly good and a great accouterments to the food.

So yea, visit Fat Matt’s for the good value tasty southern BBQ fare, seat yourself inside to enjoy the shack experience and the amazingly attentive staff, and stay for the (free) nightly blues music – maybe bring some cash as there is a tip jar the does the shack circuit to contribute to the bands’ bluesy needs.  Learn more at Fat Matt’s website. 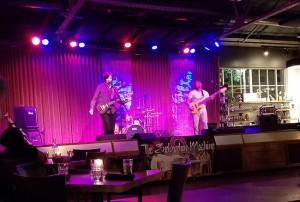 So we discovered this place via a client, thanks Rachel…hope you are enjoying Tribute Lofts

For you Atlanta “Old-timers” the restaurant is located in the old Hall’s wholesale flower shop. It’s in the back so is a bit hard to find, for us anyway. Frankly, I couldn’t believe I had heard about it sooner so once we did, off we went! 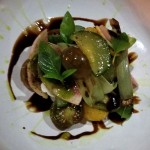 It is owned by two members of the Yacht Rock Revue so music is as important as the food here. Both fared well in my opinion

The band that night was a Prince cover band which sounded fun. The hostess was very accommodating when we called and wanted a dinner table that we could keep for the show. Tix were $10 each which was very reasonable given the cost of concert tickets these days! 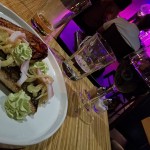 The drink menu was interesting and included a frozen Rose slushy; I couldn’t resist and it was delish. There were a few Prince “purple” cocktails as well. For food we tried the Mussels with BBQ sauce and and the Burrata with leeks, tomatoes and compressed cucumber. The Burrata won out. BBQ mussels were fine but not our cuppa tea. For the entrée we shared the GA Trout with fennel 2-ways, bacon and dill whipped cream. It was very good and plenty for the two of us. 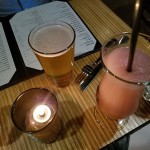 Then the music began….we danced and had a GREAT time. Definitely worth the $20 entry fee!

Check out the Venkman’s website for menus and show information.